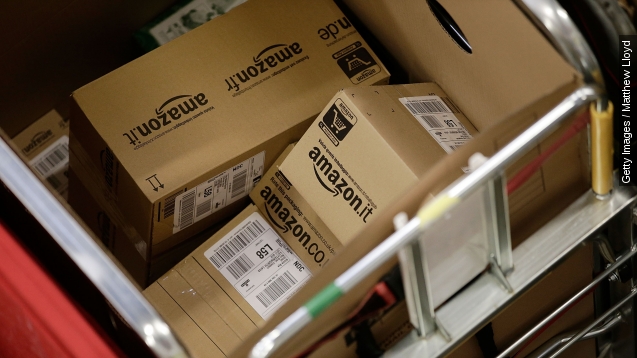 SMS
Amazon Announces Restaurant Delivery
By Ryan Biek
By Ryan Biek
May 22, 2015
Amazon announced subscribers to its Prime service in Manhattan can now get food from restaurants delivered for free.
SHOW TRANSCRIPT

Is it just us, or is Amazon trying their best to keep folks from leaving their homes?

Yesterday, the company announced members of its Prime service in Manhattan can now get food from local restaurants and grocers delivered to their doors –– for free and in two hours.

Just three restaurants' menus are currently being offered, but CNN notes two more major vendors are set to be included soon. You can even get your food in under an hour, if you're willing to pay $7.99 for delivery. That seems high, but might not seem so extreme considering it's New York City.

Prime subscribers are already able to stream movies, music and books –– not to mention store an unlimited amount of photos.

Amazon is getting some stiff competition though. Earlier this month Walmart announced it would be testing a subscription-based service offering unlimited shipping, much like Prime but at half the cost for consumers.

And Uber recently announced an experimental service called UberEssentials, turning their established ride booking network into a delivery network of household items. However, the company is currently offering a price list instead of a subscription service.

Some goods might be better than others for delivery, though. CNBC reports a study by PricewaterhouseCoopers found last year only one percent of consumers said they primarily bought groceries online. Many said there'd rather be there in person to examine food, especially produce.

So maybe the bigger news in this Amazon announcement is their goal to establish connections with restaurants. After all, if you've been to a restaurant before, you have a good idea how the plate will turn out. But will this effect what restaurants become your favorites?

Consider TV. The Huffington Post reported in March that 40 percent of American households have subscribed to Netflix, Prime or Hulu Plus. With cable, advertisers foot the bill. But with streaming services, customers pay for what's essentially delivery –– with the deliverers deciding what shows are available.

Could the restaurant industry fall into a similar situation, with restaurants having to convince the deliverers they're worth working with? Since Statista reports Americans spent $10 billion on pizza delivery last year, it's easy to see why other kinds of restaurants would want to get into the delivery game.

This video contains images from Getty Images, Public.Resource.Org / CC BY 2.0 and Tojosan / CC By NC ND 3.0.