Amanda Knox Calls Herself 'The Lucky One' After Acquittal 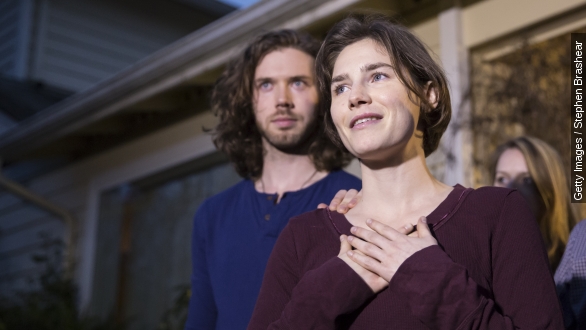 After winning a long legal battle, Amanda Knox says she's grateful for the justice she has received.

"I'm so grateful to have my life back," Knox said.

On Friday, Italy's highest court overturned both Knox's and her ex-boyfriend's guilty convictions for the 2007 death of Knox's roommate Meredith Kercher.

Knox called Kercher her friend during a press conference held at her family's Seattle home.

"She deserved so much in this life. I'm the lucky one," Knox told reporters.

Although she was acquitted of murder, Knox's conviction for slander was upheld, for which she has already served time.

Knox had accused her former boss of being involved murder, and according to CNN, she owes him $54,000 in damages.

Knox and her then-boyfriend Raffaele Sollecito were arrested in Italy in 2007 shortly after Kercher's body was found with her throat slashed, multiple stab wounds and signs of sexual assault. (Video via CNN)

In 2009, the duo were convicted of murder and sexual assault in an Italian court. Knox got 26 years while Sollecito received 25.

Except Italy's highest court then ordered a new trial. That trial came and went last year, and the 2011 decision was overturned, upholding the 2009 guilty verdict. Knox was given 28.5 years in that verdict. (Video via BBC)

The latest court decision spells the end of Knox's legal battle. The reasoning behind the ruling will be released within 90 days.