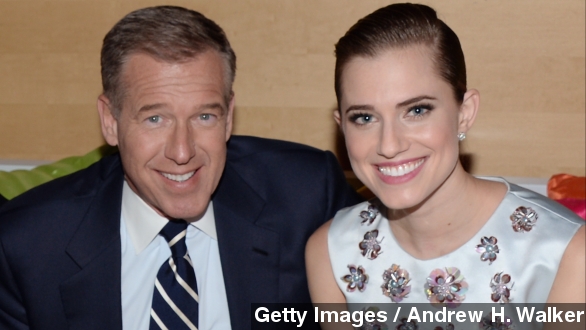 During an interview with Seth Meyers at the 92nd street Y, Allison Williams broke her silence on her father Brian Williams' six-month suspension, saying it's been hard on her family but her faith in her father has not been shaken.

"One thing this experience has not done is shake my trust in him as a man. He's a really good man. He's an honest man. He's a truthful man. He has so much integrity; he cares so much about journalism."

Williams also admitted during her interview with Meyers that the controversy surrounding her father has slightly delayed her ability to focus on planning her wedding to fiance Ricky Van Veen.

Brian Williams was suspended for six months after he "misrepresented events which occurred while he was covering the Iraq War in 2003."

"As the roofing materials dangle behind us here at the Superdome," he said during one of his Hurricane Katrina reports.

This revelation has led many to question other stories he's told while covering national news, such as what he did and did not witness during Hurricane Katrina.

Since Williams suspension NBC weekend anchor Lestor Holt has taken over anchoring the Nightly News. And after a week of subbing for Williams, Holt and NBC have held on to its top spot in the ratings, averaging 9.4 million viewers. (Video via NBC / "Late Night with Seth Meyers")