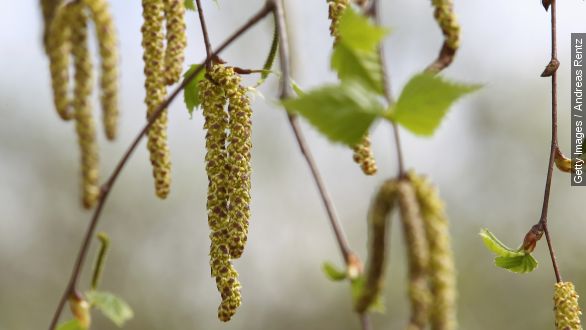 SMS
Allergy Sufferers, Beware Of The 'Pollen Tsunami'
By Jake Godin
By Jake Godin
May 7, 2015
A "pollen tsunami" is hitting the U.S., giving folks strong allergic reactions, but what's the cause?
SHOW TRANSCRIPT

There's a storm brewing in the Northeast. But unlike the nor'easters from seasons past, this one isn't full of wind and rain. Instead, it's pollen.

"We have a health alert now for the 45 million Americans who suffer from seasonal allergies. Warnings of a pollen tsunami with doctors warning of one of the worst allergy seasons in years," George Stephanopoulos said on "Good Morning America."

One doctor described the situation for NBC, calling it a "triple whammy." Early- and mid-spring tree pollen along with grasses are all producing pollen at the same time, which is making for some awfully runny noses.

"The pollen tsunami is real, and individuals now who have seasonal allergies know who they are, they're in allergy misery," Dr. Clifford Bassett told WNYW.

As for the root of this so-called pollen tsunami? A harsh winter combined with a delayed spring created the perfect conditions for maximum pollen.

Climate change may also play a part. A 2014 scientific study published in Global Change Biology linked changes in pollen season and timing with changes in the Earth's climate.

As for what you can do to help fend off any pollen, some tips include wearing sunglasses, exercising indoors when possible and keeping track of the pollen count in the area.