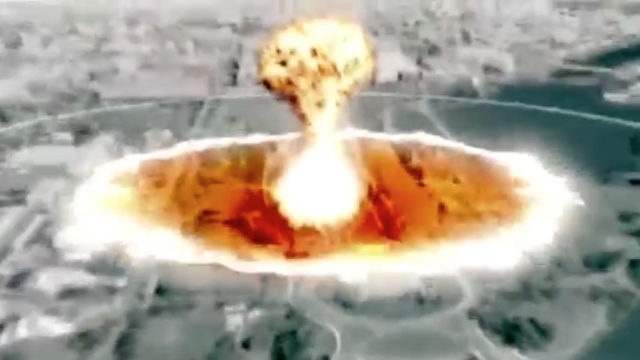 SMS
Alleged North Korea Propaganda Video Shows Nuclear Attack Against US
By Mikah Sargent
By Mikah Sargent
March 26, 2016
The video is believed to be a response to recent U.S. sanctions against the reclusive nation.
SHOW TRANSCRIPT

A video uploaded to the YouTube channel of North Korean news site D.P.R.K. Today not only features some spirited — if dated — music but also depicts an animated nuclear attack on Washington.

The New York Times translated some of the language in the alleged propaganda video, titled "Last Chance." It says, "If the American imperialists provoke us a bit, we will not hesitate to slap them with a pre-emptive nuclear strike."

Other than showing a simulated nuclear attack on the U.S., the video retells North Korean successes, like when North Korean patrol boats captured the USS Pueblo in 1968.

The video is believed to be a response to the Obama administration's recent sanctions on the country. The measures prohibit trade between the U.S. and North Korea's government.

Perhaps more troubling for the country, is the sanctions' effect on Chinese trade in North Korea. See, the U.S. must also sanction foreign companies that trade with North Korea.

Not long after the video was posted, the quarrelsome country reportedly threatened to attack South Korea's presidential palace in retaliation for "plans to attack [North Korean] leadership."