All These 'Daily Show' Departures Are Making Our Heads Spin 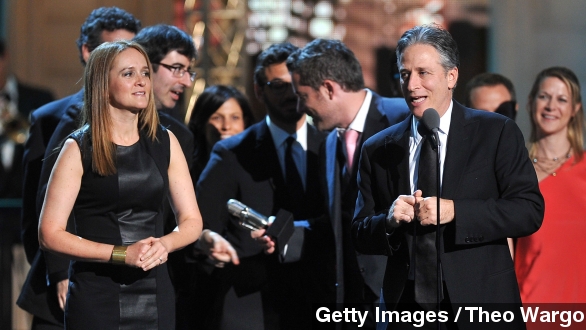 SMS
All These 'Daily Show' Departures Are Making Our Heads Spin
By Jay Strubberg
By Jay Strubberg
March 6, 2015
Thursday, Long-time "Daily Show" correspondent Samantha Bee becomes the latest in a string of comedians to leave the show. Can "Daily" stay alive?
SHOW TRANSCRIPT

Things are definitely going to look a lot different on "The Daily Show" in the near future.

In case you missed it, long-time "Daily Show" correspondent Samantha Bee announced Thursday she'll be leaving the network to host and executive produce her own satirical news show on TBS. (Video via Global News / 'The Morning Show')

"I know you're expecting an apology and, believe me, you'll get it."

"An apology for what, Sam?"

And, Sam's gonna have a full plate moving forward.

Last month, it was revealed she and husband Jason Jones — sadly another vanishing "Daily Show" correspondent — will be executive producing another new 10-episode comedy series on TBS. (Video via KTTV)

It reportedly stars Jones as the father of a family heading out on a road trip to Florida that ultimately goes awry — weird things happen, comedy ensues. You know the drill.

"I have to remind myself that some birds aren't meant to be caged. Their feathers are just too bright," Red said.

The couple's departure adds to the onslaught of comedians leaving the "The Daily Show" recently, most of them for greener pastures. And, we mean greener in terms of money and exposure only. Let's count them up.

There's Larry Wilmore, host of "The Nightly Show," which is off to a great start.

"So excited. I feel like there's so much to talk about, especially if I had the show a year ago," Wilmore said.

He took over that timeslot when Stephen Colbert put his Emmy Award-winning show to bed and jumped ship to CBS.

"Because everyone wants to talk about the king," Colbert said.

Yes, you're not alone. We're going through withdraw too.

There's Michael Che, who was on "Daily" for less than 10 episodes, before sliding into the "Weekend Update" anchor chair on "Saturday Night Live."

And there's "Last Week Tonight with John Oliver." The British comedian is soaring over on HBO, dissecting meaty topics like Net Neutrality.

"The guy who used to run the cable industry's lobbying arm is now running the agency tasked with regulating it. That is the equivalent of needing a babysitter and hiring a Dingo," Oliver said.

Oh yeah, and then there's departure of The Godfather himself, which is less a kick in the gut like the others and more of a knock out blow for "Daily Show" worshippers. (Video via YouTube / IranPoletik)

So, bottom line here: what's going to happen to "The Daily Show" moving forward? More specifically: who exactly can fill Stewart's shoes? And, a follow-up: uh, good luck with that.

Comedy Central hasn't really said anything yet, but several media outlets think this would be a great opportunity for the network to be a trend-setter and cement a woman in the "Daily Show" anchor chair.

"I would love to see a woman in that position, if I only knew one funny woman. I honestly can't think of a woman that can actually take that place," Jones said.

Though, you can already count out Samantha Bee with her new TBS gig, and up-and-coming headstrong comedian Jessica Williams has already said she's not interested.

Ultimately, a Vanity Fair writer is a bit worried and says, one way or another, the show will soon "look radically different," if it even stays afloat.

"It is entirely possible that there might not be a Daily Show at all. Comedy Central is unlikely to let go of the name, but it also may have trouble finding someone eager to take over the intimidating institution Stewart built."

Then again, I guess we should've seen this all coming ...

"We're correspondents on a basic cable fake news show. That's the waiting tables of being on television," Bee joked.