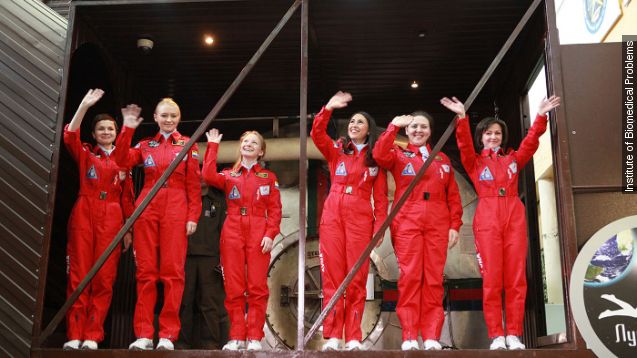 SMS
All-Female Space Test Brings Out Russian Media's Sexist Side
By Katie Link
By Katie Link
October 29, 2015
A group of six women is spending the next several days inside a "mock spaceship" to see if they're up to the task of guiding the next moon mission.
SHOW TRANSCRIPT

A group of six Russian women is spending the next several days locked inside a stationary spaceship. And it's bringing out Russian media's ... let's call them "quirks."

The experiment, carried out by Moscow's Institute of Biomedical Problems, is meant to gauge how women would do on a proposed mission to the moon in 2029. They'll complete various scientific experiments and measure how well they work together. (Video via Russian Federal Space Agency)

Russia's first female cosmonaut hit the skies back in 1963. Since then only four Russian women have had the chance to explore space. So you could think of the new experiment as a first step toward leveling the playing field.

But it's not off to a good start. The participants faced some pretty sexist questions, with reporters focusing on how the women would fare without makeup, showers and men. (Video via Channel 5 Russia)

One participant reportedly answered, "We are very beautiful without makeup," while another said they were there to work. (Video via RT)

It's not just reporters. The head of the organization behind the experiment characterized it as a study on whether women can work together in a confined space, comparing them to housewives sharing a kitchen. (Video via Channel One Russia)

Russia has also put men in the same confined space to simulate a mission to Mars, and while the experiment was largely the same, measuring their ability to get along and cope with isolation, that mission was for 500 days. (Video via European Space Agency)

The women will be released from the mock spaceship next Thursday.