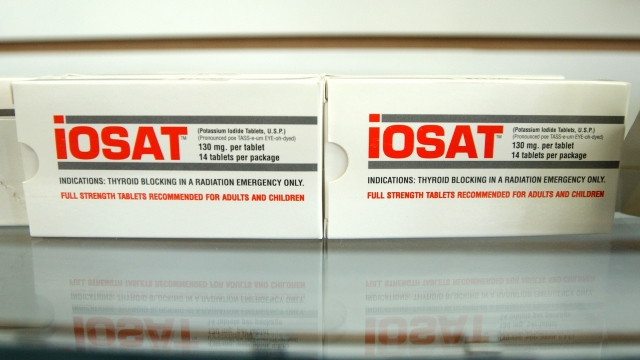 SMS
All Belgians Will Get Iodine Pills In Case Of A Nuclear Emergency
By Briana Koeneman
By Briana Koeneman
April 29, 2016
The pills will be sent to pharmacies and, in the event of a nuclear meltdown, citizens will be ordered to pick up their share.
SHOW TRANSCRIPT

The Belgian government has decided to give its entire population iodine pills in case of a major emergency at one of its nuclear reactors.

Now, the government had already issued the pills to people living within 12 miles of the nuclear power plants.

But the health minister was quoted by Belgian media Thursday as telling parliament the range has been widened to 62 miles, which would cover the entire country.

The pills will be sent to pharmacies and, in the event of a nuclear meltdown, citizens would be ordered to pick up their share. Children, pregnant women and breastfeeding mothers would be given first priority.

According to the Centers for Disease Control and Prevention, when taken during a nuclear accident, iodine pills block radioactive material from entering the thyroid.

The thyroid can't tell the difference between stable and radioactive iodine. So when a person takes one of these pills, their thyroid becomes "full" and can't absorb any more iodine, either stable or radioactive, for the next 24 hours.

But it comes just a week after the country refused a request from Germany to temporarily shut down two of its oldest reactors over safety concerns.

And there have been concerns that terrorists might have been trying to gain access to Belgian nuclear power stations as part of the attacks on Brussels in March.

The update to the iodine pill policy is expected to be finalized in June.

This video includes clips from VTM Nieuws, Centers for Disease Control and Prevention, and France 24, and images from Getty Images.