Mothers Steal The Show At The VMAs 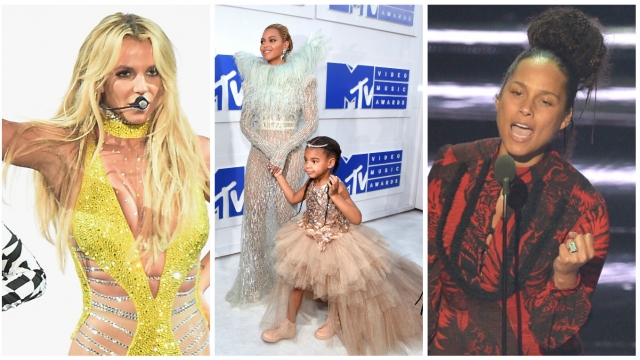 It seems every MTV VMAs comes with a few staples: collaborations, cringeworthy moments and speeches from Kanye West.

And sure — all four Rihanna performances were delicious, and Nick Jonas made us all want a BLT, but let's discuss how the show was carried by women who've carried life.

The honorable maternal mentions started with Alicia Keys. Before the mother of two presented the moonman for best male video to Calvin Harris, she used her platform to reflect on the 53rd anniversary of Martin Luther King Jr.'s "I Have a Dream" speech — later sharing a poem inspired by the activist.

Britney Spears — mother of two and pop goddess — made a triumphant return to the VMA stage after nine years away from it. Unlike her 2007 performance of "Gimme More," we actually wanted more this year. Britney emerged looking, dancing and lip-syncing as good as the days she donned bikini tops and Burmese pythons.

But Queen Bey started slaying the whole show as soon as she got there. She rolled up looking otherworldly with daughter Blue Ivy and also stood in solidarity with the mothers of gun violence victims.

She took the stage with a message of female empowerment and made us fear and respect her talent — something only a mother could do. The Queen took home eight moonmen, including top prize for video of the year.

But perhaps the biggest feat MTV accomplished was making us actually want to watch a music video.

Teyana Taylor made us all put down the snacks we were eating during the VMAs to watch her performance in Kanye West's new video for "Fade." The singer had a child less than a year ago, but like every other mother who took the VMA stage, Taylor is "strong enough to bear the children, then get back to business."