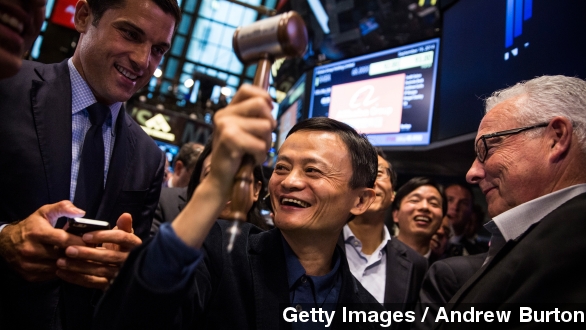 When Alibaba went public earlier this year, it was one of the biggest IPOs of all time — and on Tuesday, we had our first glimpse at whether buying in was a good investment.

CNBC: "The big story of the morning is, of course, Alibaba. Shares in the green after quarterly profit was in line with street estimates."

BLOOMBERG: "No surprises — and I think that's what they got here. Revenue, EPS generally came in line with slightly better than expectations."

By all accounts, it seems to have been a good quarter with the company reporting revenue of $2.74 billion — a 54 percent increase over this time last year — and earnings per share of 45 cents. (Video via YouTube / Alibaba UK)

According to The Street, a lot of the credit for those good numbers rests on growth in mobile users. It notes Alibaba added 29 million mobile monthly active users in just the last quarter and has seen mobile revenue soar by more than 1,000 percent since this time last year.

It wasn't all rosy news for the company, though, as TechCrunch reports the company's net income fell 38.6 percent year over year.

But according to The Wall Street Journal, the company blames that drop on employee stock offerings related to its IPO.

All of this comes ahead of the equivalent of Black Friday in China, known as Singles Day. (Video via Press TV)

For a little perspective, Alibaba is currently more valuable than Amazon, IBM, and Facebook — and moved past American retail giant Wal-Mart just before this earnings report.