Alibaba's Disappointing Earnings Pile On To List Of Problems 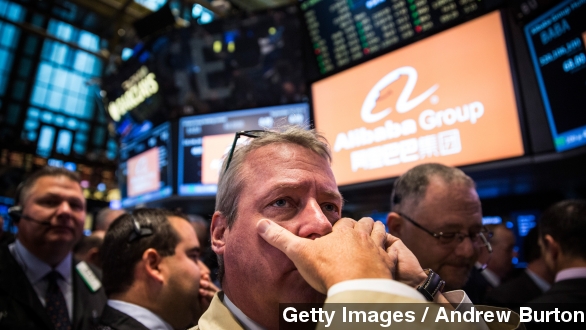 SMS
Alibaba's Disappointing Earnings Pile On To List Of Problems
By Jake Godin
By Jake Godin
January 29, 2015
With regulators breathing down its neck, Alibaba's disappointing stock market earnings may be the least of its problems.
SHOW TRANSCRIPT

The Alibaba earnings report is out, and things look ... well, a bit disappointing.

Net profits also dipped by 28 percent going from about $1.35 billion to $964 million — something Alibaba attributed to stock expenses and a one-time charge. (Video via Alibaba.com)

But waning stock prices aren’t Alibaba’s only problem. A scathing report from China's State Administration for Industry and Commerce is also stirring up trouble for the company.

The report, which has since been taken down, accused Alibaba and its various commerce sites of selling counterfeit or banned goods and says the company is "facing the biggest credit crisis ever since it was founded." (Video via Alibaba.com)

The SAIC report highlights what a writer for The New York Times says is the political risk that an investment in the Chinese giant brings as companies struggle with China's "opaque and at-times arbitrary government regulators."

For its part, Alibaba has denied the government's accusations and even went as far as to file a formal complaint to the regulatory administration.

"We felt we were unfairly attacked by a report that was a sample check of some of the items. We thought the methodology was flawed …" Alibaba Executive Vice Chairman said on CNBC.

And Alibaba isn't the only one to get knocked by the regulators. Last year, Fortune noted plenty of Western businesses were facing increased scrutiny as Beijing attempted to reign in its regulations.