Algae May Be To Blame For Memory Loss In Sea Lions 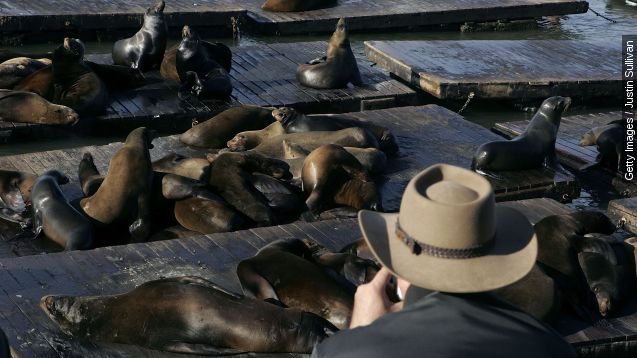 SMS
Algae May Be To Blame For Memory Loss In Sea Lions
By Katie Link
By Katie Link
December 15, 2015
Researchers suspect a toxic algae is poisoning sea lions and damaging their spatial memory.
SHOW TRANSCRIPT

Thousands of sea lions have turned up on West Coast beaches in bad condition this year. And it looks like poisonous algae might be driving them there.

As of June, more than 3,000 sea lion pups have been stranded on the California coast. A group of researchers took note and studied some of these animals. They found that long-term exposure to domoic acid is causing brain damage to the hippocampus — the area that stores memories. (Video via NBC)

"All right, Dory, let's go over this one more time, we know your memory is not the best," Marlin said in "Finding Nemo."

We're thinking Dory's condition was an isolated issue. Not the case for these sea lions.

It appears a marine algae producing domoic acid is creeping into sea lions diets and is making them lose their minds. (Video via The Marine Mammal Center)

One of the researchers said, "What we’re most concerned about right now is this year we have had the likely largest ever recorded algal bloom producing domoic acid on the U.S. West Coast, spanning the largest geographic range.”

According to Newsweek, scientists conducted brain scans on 30 sea lions. They found those with obvious brain lesions were less likely to remember where food was placed in an enclosure compared to healthy sea lions.

And forgetting where food is located, whether they're in an enclosed space or out in the wild, makes the animals weak.

"When they're so malnourished and underweight like they are now they get cold really quickly, they have no energy, so they want to be out of the water to rest and to warm up," Marine Mammal Biologist Colleen Weiler told Vice.

As for why there's more of the toxic algae in the waters than ever before? Fertilizer run off and global warming are the main suspects.