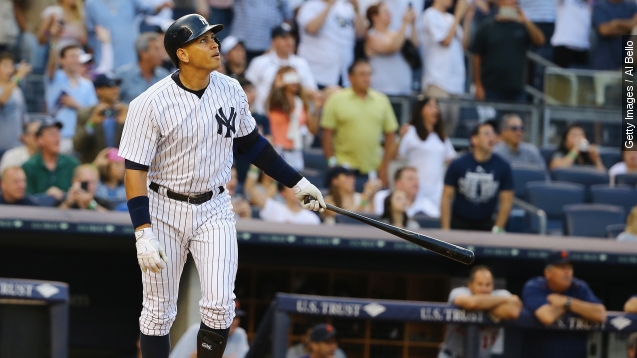 But it wasn't just any hit. Rodriguez homered No. 3,000, becoming only the third player in baseball history to do so. Friday's quadruple-digit achievement comes a little more than a month after A-Rod tied Willie Mays for all-time home runs at 660.

Much of A-Rod's season, so far, has been overshadowed by his year-long suspension, bonus money he was owed, his use of performance enhancing drugs and a hand-written apology — that some people pretty much labeled a farce. Take for instance this dramatic reading of his apology. (Video via YES Network)

"I accept the fact that many of you will not believe my apology or anything that I say at this point."

But despite what sports reporters have called a "lack of attention" — or just flat-out apathy — for A-Rod's achievements this season, he reportedly garnered stadium-wide approval Friday, at least for a moment. His teammates cheered him on, fans screamed and the jumbotron read, "Congratulations, Alex."