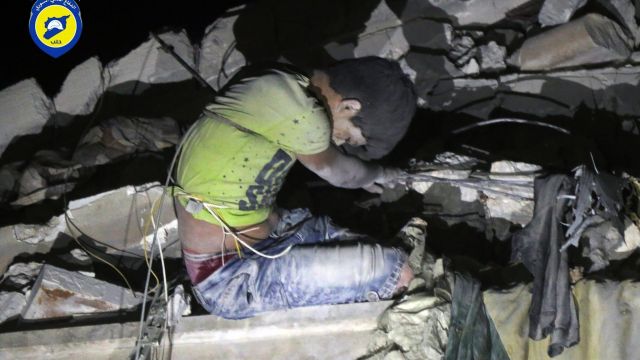 SMS
An Airstrike Left This Syrian Boy Hanging From A Pile Of Rubble
By Matt Picht
By Matt Picht
October 18, 2016
At least 21 other people were killed in the strike.
SHOW TRANSCRIPT

An airstrike in Aleppo, Syria, left this boy hanging from a building.

The strike pinned his legs beneath a pile of rubble. Rescuers eventually managed to free him.

At least 21 other people were killed in the strike.

One monitoring group says airstrikes killed 448 people in Aleppo over the past month.

The strikes were conducted by the Syrian Regime and Russia.

Russia and Syria have temporarily halted airstrikes in Aleppo. They're calling it a humanitarian pause to let people evacuate the city.

The U.S. is weighing sanctions on the regime and its allies.