Albert Einstein's Vintage (Smelly) Jacket Is Worth Over $145,000 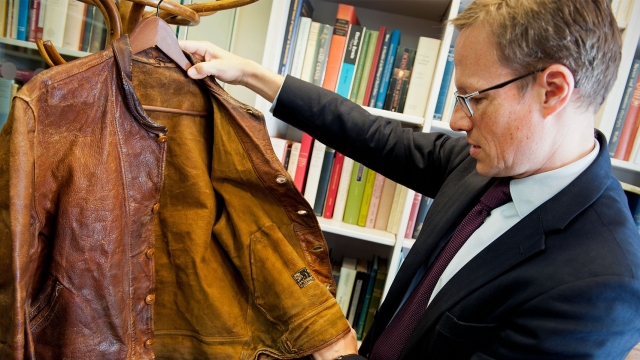 A leather jacket worn by arguably the most famous scientist in the world just sold for a little over $146,000 — nose plugs not included.

Albert Einstein was a chronic pipe smoker, and a specialist told Christie's auction house, "Astonishingly, 60 years after his death, his jacket still smells of smoke."

But if you can get past the "pungent" smell, the jacket is practically a part of Einstein himself. The earliest photos of him wearing it come from the mid-1930s "at the height of his fame."

And the leather has worn considerably over the decades. Einstein didn't seem to own many others.

Just like how his long hairstyle cut down his trips to the barber, a fellow scientist at Princeton University wrote, "One leather jacket solved the coat problem for years."

The jacket's new, unnamed owner is its first since Einstein died in 1955.

Alongside the jacket, Christie's sold a set of building blocks from Einstein's childhood and his pocket watch.

The watch comes from a very different time in the scientist's life, when he was 21 years old and still a "total unknown." Even though it had an estimated worth of under $27,000, it sold for over $353,000.