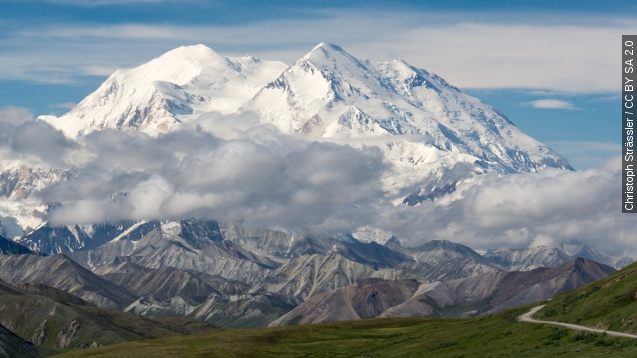 After more than 40 years of regulatory limbo, Alaska's Mount McKinley has a new name.

Encouraged by President Obama and supported by the State of Alaska, the Secretary of the Interior signed an order Sunday changing the name of Mount McKinley to "Denali." (Video via Alaska Dispatch News)

Previously named after the 25th president of the United States, William McKinley of Ohio, who — it turns out — never visited Alaska, the mountain's name has been been a point of contention for decades.

In March of 1975, then-Governor of Alaska Jay S. Hammond requested the Department of the Interior change the mountain's name to Denali as it holds special significance for Alaskan Natives.

According to Alaska Dispatch News, Denali is the mountain's Koyukon Athabascan name. And despite what you might read, "[It] does not mean 'The Great One,' as is commonly believed, but is instead based on a verb theme meaning 'high' or 'tall.'"

As for the regulatory limbo, Alaskan officials have been trying to change the name on and off for more than 40 years. But every time Alaskan legislators file a request, Ohio legislators have reportedly blocked it.

President Obama is set to announce the mountain's new name Monday when he visits Anchorage. The White House has reportedly positioned the renaming as a means to improve relations with Native Americans.

The Washington Post quoted the president of the Alaska Federation of Natives who said, "It's symbolic, but the practical thing is now on all the maps and all the descriptions it will have the traditional name. That is wonderful, it is timely and the right thing to do."