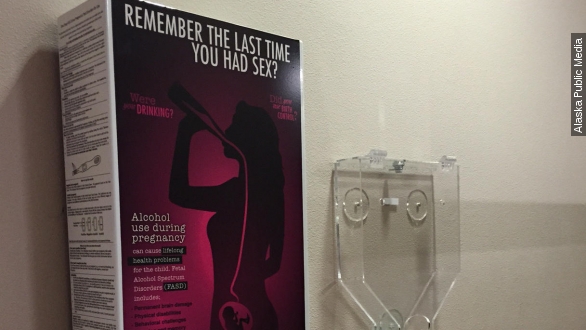 "With a baby?" (Video via Universal Pictures / "Knocked Up")

You go out drinking with your girlfriends one night. One thing leads to another and you walk into the bar's restroom and see this:

A little poster totally killing your buzz and asking you the last time you had sex and also offering up a free pregnancy test.

It's actually part of an important community-based intervention program. Get your serious shoes on.

The dispenser is at several bars in the state because the University of Alaska Anchorage is trying to get women thinking about drinking during pregnancy.

The poster specifically mentions Fetal Alcohol Spectrum Disorders, or FASDs, which cause physical, mental or behavioral problems in a child.

While it's an issue around the United States, Alaska specifically has "the highest rate of [FASD] cases per capita in the U.S," according to the Alaska Mental Health Trust Authority.

The CDC says there's no safe amount of alcohol consumption during pregnancy.

"There are still doctors that will say 'oh, you know, a glass or two of wine, you know, isn't such a big deal. Well, it's kind of like Russian roulette,'" the CEO of Alaska Mental Health Trust said.

Alcohol is the leading preventable cause of "birth defects and developmental disabilities," according to the Centers for Disease Control and Prevention.

In a perfect world, women would know as soon as they're pregnant, but oftentimes women don't know immediately. That's where those pregnancy tests in the bars come in.

The $400,000 study is meant to promote FASD awareness and will continue through June 2016.