Alabama's Chief Justice Is On Trial For Ethics Charges ... Again 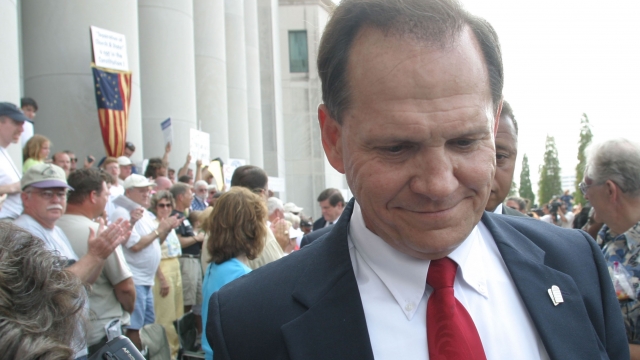 SMS
Alabama's Chief Justice Is On Trial For Ethics Charges ... Again
By Briana Koeneman
By Briana Koeneman
September 28, 2016
This time, Roy Moore is being accused of abusing his power by trying to stop same-sex couples from marrying in the state.
SHOW TRANSCRIPT

Alabama's chief justice could lose his job for the second time in 13 years.

This time, he's being accused of abusing his power by trying to stop same-sex couples from marrying in the state.

Roy Moore is scheduled to stand trial Wednesday to defend himself against several judicial ethics charges.

It all started back in January, when Moore sent an administrative order to state probate judges telling them it was their "ministerial duty" not to issue same-sex marriage licenses.

SEE MORE: So, The GOP Might Change Its Stance On Gay Marriage

The problem is, the U.S. Supreme Court had legalized same-sex marriage at that point, and a federal ruling had declared the Alabama Supreme Court ban unconstitutional.

Moore denies the accusations. He claims he simply told the judges that there was still a conflict between state and federal court orders.

The Alabama Court of the Judiciary has 10 days after the trial to decide if it will remove Moore from the bench. The decision has to be unanimous.

In the meantime, Moore's suspension continues.

Correction: A previous version of this video incorrectly stated that Roy Moore was suspended without pay. The video has been updated.