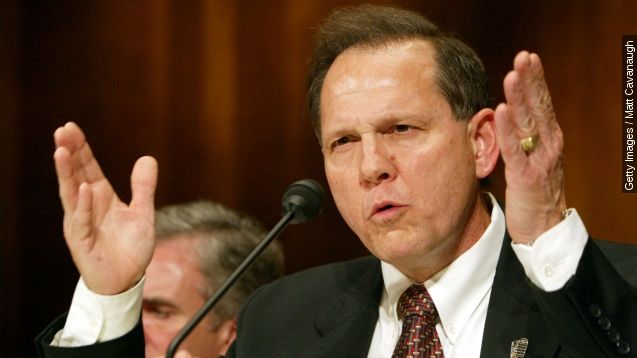 In an administrative order, Moore said probate judges have a "ministerial duty not to issue any marriage license contrary to the Alabama Sanctity of Marriage Amendment or the Alabama Marriage Protection Act."

You may be thinking, "Didn't the Supreme Court already handle this one?" Not according to Moore. The order points out the Obergefell v. Hodges decision only applied to the states named in the case: Michigan, Kentucky, Ohio and Tennessee. Not Alabama.

Moore's been battling against same-sex marriage for a while now. When a U.S. district judge deemed Alabama's ban on gay marriage unconstitutional in January 2015, Moore wrote a similar order. (Video via The Christian Broadcasting Network)

That same district judge reaffirmed her ruling twice: once in May last year and again after the Supreme Court decision.

In the latest order, Moore says some recent developments, including the case of Kentucky county clerk Kim Davis who was arrested for refusing to issue marriage licenses to same-sex couples, have caused confusion and uncertainty that "affects the administration of justice." (Video via CNN)

As you can imagine, same-sex marriage proponents aren't happy. The Southern Poverty Law Center says Moore's order can't override the district judge's ruling and "he should be removed from office." The group told NPR, "This is Moore yet again confusing his role as chief justice with his personal anti-LGBT agenda."

Moore's order says the same-sex marriage ban will stay in place until "further decision by the Alabama Supreme Court." No word yet on how long that will take.