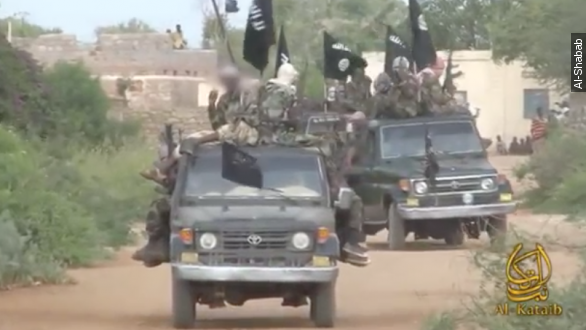 Somali militant group Al-Shabab has threatened to make the streets of Kenya “run red with blood.”

The threat comes two days after Al-Shabab gunmen stormed a university campus in Garissa, Kenya. One hundred and forty-eight people were killed in that attack, most of them students. (Video via ODN)

The attack marked the deadliest Kenya had seen since 1998 when Al-Qaeda blew up the U.S. embassy in Nairobi. (Video via K24)

Al-Shabab claims close ties to Al-Qaeda and is a designated terrorist group by the U.S. The group is active mainly in Somalia, where it's based, but the militants have also waged a campaign of terror in neighboring Kenya.

In just two years, Al-Shabab has killed more than 200 people in Kenya, about 60 of whom died during the group's four day siege on Nairobi's Westgate shopping mall in 2013. (Video via NTV)

Kenya's president has pledged to intensify the war against Al-Shabab. For more than three years, Kenyan troops have been station in Somalia as part of an African Union peacekeeping force aimed at crushing the insurgency.

Sure enough, in an audio message released Thursday, an Al-Shabab spokesperson said the attack was carried out because “the Christian government of Kenya has invaded our country.”

As Al-Shabab sees it, because Kenyans voted for a government that’s fighting Al-Shabab, Kenyans themselves should be targeted.

In some ways, the attack on Garissa University, along with Al-Shabab's recent attack on a hotel in Mogadishu, is a sign of weakness. As terrorism analyst J.M. Berger points out, it takes a lot less effort to kill citizens than it does to seize and govern territory.

"If the insurgency fails but is not definitively crushed, it can free up potentially thousands of experienced fighters for terrorist activities."

The group has has called for attacks beyond East Africa, though intelligence experts doubt it has the capacity to carry them out. In February, Al-Shabab named the Mall of America in Minnesota as a target.

Minnesota is home the biggest number of Somali immigrants in the U.S. Officials say since 2007 over 20 Somali-Americans from the state have traveled overseas to fight with Al-Shabab and, in some cases, ISIS.