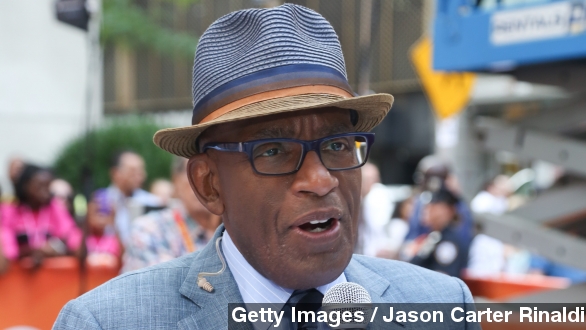 Weathercaster  and TV personality Al Roker is going for a world record and it'll take him at least 34 hours to pull it off.

The "Today" show weatherman is attempting the longest uninterrupted weather broadcast in history — nicknamed the "Rokerthon."

Roker has made it known this stunt is aimed at raising money for the United Service Organizations, or USO, through crowdsourcing site CrowdRise.

But Roker's true inspiration for attempting what is undoubtedly a grueling feat is the person he's trying to beat — Norwegian meteorologist Eli Kari Gjengedal. (Video via TV2)

Gjengedal spent more than 33 hours on-air back in September, surpassing the previous record of 24 hours. Roker admitted to The Daily Beast his attempt started out as a joke after reporting on Gjengedal's broadcast. (Video via BBC)

Roker talked to Gjengedal during the "Today" show Wednesday about what inspired her to make the record-breaking attempt.

ELI KARI GJENGEDAL VIA NBC: "One, I wanted to have focus on weather because it is so important. And the second thing was Norwegian people are so into weather, so I was thinking that we have to have that record."

Of course, what's a Guinness World Record-attempt without a few rules? NBC reports Roker can take a 5 min break every 60 minutes, he will have to talk about weather the entire time (outside of breaks) and two independent witnesses must be there at all times.

Roker's broadcast will stream live online and he'll most likely appear on some of the more than 220 NBC affiliate stations across the nation. Rokerthon will begin at 10 p.m. ET Wednesday night and, hopefully, last until 8 a.m. For more information, visit Today.com/Rokerthon.