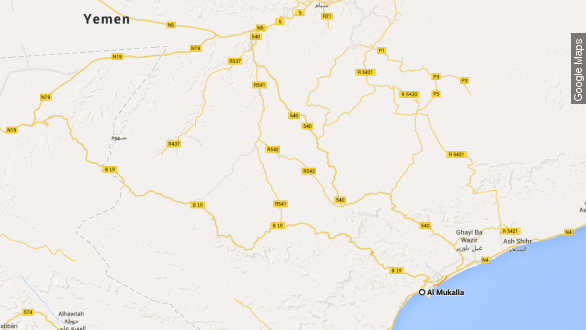 It's been a week since Saudi-led airstrikes started in Yemen. Now the conflict there has reportedly led to a major jailbreak. (Video via Radio Free Europe/Radio Liberty)

A defense ministry official told CNN the freed prisoners included prominent Al-Qaeda member Khaled Batarfi. The prison break was part of a broader raid on the city, which has so far been mostly spared in the conflict.

The southern city of Aden, on the other hand, has seen the bulk of the fighting in the country as Shiite rebel forces fight their way into the city. (Video via Al Arabiya)

They're fighting with forces still loyal to the country's president, Abed Rabbo Mansour Hadi, who still hold most of the city. (Video via Embassy of Yemen in D.C.)

Hadi was ousted from the country's capital in Sanaa by Houthi rebels in January, but government officials say the Houthis aren't the real threat.

"They are rebels, they are few, they have only light weapons, which most of the Yemenis as well have got it. But because they're Ali Abdullah Saleh forces, which have heavy artillery, have all kinds of weapons," the country's foreign minister told Al Jazeera.

Ali Abdullah Saleh is a former president of Yemen, ousted in the Arab Spring protests, who Yemeni officials allege is supporting the rebel effort. (Video via Yemen TV)

The rebels have also gotten extensive backing from Iran, which is looking to extend its sphere of influence in the region. (Video via Al-Masirah)