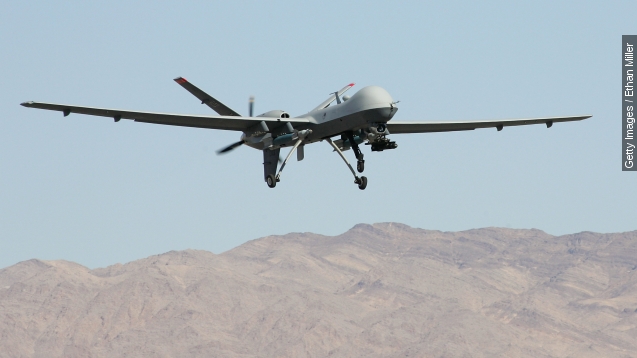 SMS
Al-Qaeda Leader Reportedly Killed By Drone Strike In Yemen
By Matt Picht
By Matt Picht
June 15, 2015
Yemeni officials say Nasir al-Wuhayshi, the leader of Al-Qaeda in the Arabian Peninsula, has been killed in an airstrike.
SHOW TRANSCRIPT

Yemeni officials are reporting Nasir al-Wuhayshi, the leader of Al-Qaeda in the Arabian Peninsula, has been killed in a U.S. drone strike.

Wuhayshi once served as Osama bin Laden's personal aide and is credited with merging and streamlining the Yemeni and Saudi branches of Al-Qaeda to create AQAP.

But so far, U.S. officials haven't confirmed that the AQAP leader was actually hit by the strike.

News of Wuhayshi's possible death comes after the reported killing of infamous Algerian terrorist Mokhtar Belmokhtar, who was also reportedly hit by a drone strike in Libya Sunday. That high-profile death isn't confirmed yet either.

Both Wuhayshi and Belmokhtar have dodged death in the past: Previous reports about their demise, in 2011 and 2013 respectively, were later discredited.