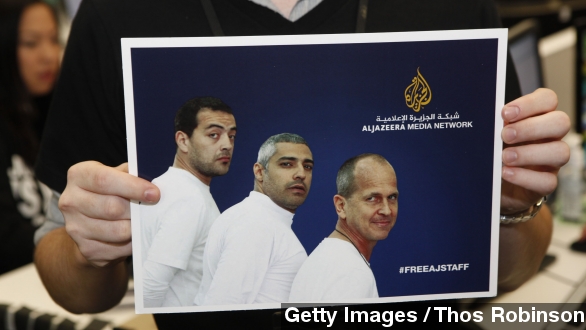 It's now been a year since Egyptian authorities first arrested three Al Jazeera journalists and detained them without charge, and on the anniversary, the network is stepping up its efforts to free them.

Those efforts included staff members lining the studio in silence Monday, holding placards that read, "Journalism is not a crime," accompanied by the hashtag "#FreeAJStaff." (Video via Al Jazeera)

That hashtag was all over Al Jazeera America's Twitter page, and prominent voices from the U.S. Ambassador to the United Nations Samantha Power to CNN's Brian Stelter tweeted their support.

A judge found the men guilty and sentenced Fahmy and Greste to seven years in prison each. Mohamed got 10 because he was in possession of a spent bullet casing he found at a protest. (Video via CNN)

But despite the international outcry, Egypt has shown no signs of budging on the men's imprisonment.

Then-Press Secretary for the White House Jay Carney said, "We have strongly urged the government to drop these charges and release those journalists and academics who have been detained."

Comments like that have been common from U.S. officials, including Secretary of State John Kerry, who met with Egyptian President Abdel Fattah el-Sisi this summer and urged him to release the journalists. (Video via CCTV)

The arrests were part of a government crackdown on terrorism, which critics say Sisi has actually used to silence opposition voices. (Video via CBS)

Still, the U.S. has apparently looked to warm relations with Egypt, following through with a move to deliver the country 10 Apache attack helicopters, a move it put on hold after Egypt's military coup last year. (Video via ABC)

Later this week, an Egyptian court will hear an appeal for the three Al Jazeera journalists.