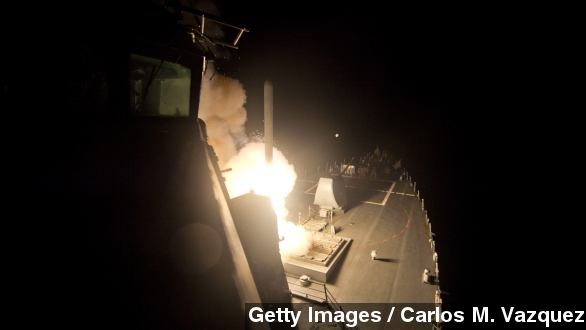 By Cliff Judy
September 29, 2014
Defense firms' stock prices skyrocketed in September as investors bought up shares of the companies supplying equipment to the U.S.
SHOW TRANSCRIPT

Airstrikes against ISIS in Iraq and Syria have served as launching point for far more than missiles. Those military decisions cost the U.S. millions of dollars a day, and defense contractors pocket much of that money. (Video via U.S. Navy)

A chief investment officer based out of Chicago said, "To the extent we can shift away from relying on troops and rely more heavily on equipment — that could present an opportunity."

"Presenting an opportunity" is the kind of wording to make anti-war advocates cringe, but there's no doubt the companies and their shareholders are making money off the unusually large number of conflicts around the world.

Take those videos the Navy keeps releasing of Tomahawk Land Attack Missiles being fired into Syria. They're manufactured by Raytheon.

In its budget request for 2015, the Defense Department estimated it spent nearly $325 million on procuring 196 missiles this year, along with research, development, testing and evaluation. That's an average of more than $1.6 million a missile.

And then there's the F-22 Raptor fighter jet, a technological marvel that could both outpace and outmaneuver any of its predecessors, according to military officials. (Video via Lockheed Martin)

But the Lockheed Martin jet program saw plenty of scrutiny for a price tag in the tens of billions, and — until airstrikes like this one in Syria — the $143 million-per-plane jets had seen no combat.

That, of course, has critics pointing to what they call the cyclical nature of defense companies who both profit when the U.S. goes to war and donate to lawmakers' re-election campaigns.

In fact, the D.C.-based defense think tank CSBA estimates if the U.S. continues with moderate airstrikes in Syria and Iraq, the cost will range from $200 million to $300 million a month, but that cost obviously goes up as military involvement increases. Plus, "future costs depend, to a great extent, on how long operations continue."

Military spending levels also depend on your point of view. Although the wars in Iraq and Afghanistan cost the U.S. well over $1 trillion, that's nothing compared to wars of a previous generation.

Congressional Research Service estimates spending during World War II accounted for 37.5 percent of our GDP at its peak in 1945 compared to 4.3 percent for Iraq and Afghanistan. (Video via History Channel)

Last year, The Financial Times reported total spending on the war in Iraq sent $139 billion to contractors. That report followed a 2011 commissioned report to Congress that estimated somewhere between $31 billion to $60 billion was lost to contract waste in Iraq and Afghanistan.