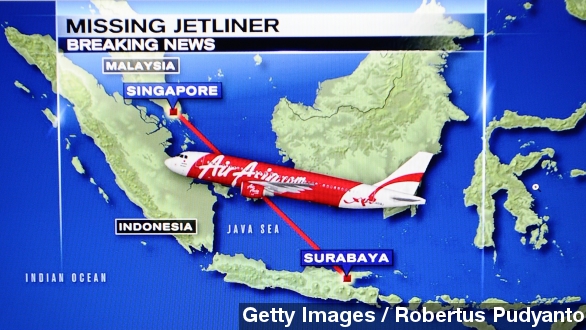 SMS
AirAsia Crash: Both Black Box Flight Recorders Found
By Jay Strubberg
By Jay Strubberg
January 12, 2015
Divers have reportedly located both the data and voice recorders in the debris of the AirAsia plane that crashed in the Java Sea last month.
SHOW TRANSCRIPT

Indonesian divers have reportedly located both black boxes in the debris of the AirAsia plane that crashed in the Java Sea last month.

The head of Indonesia's search-and-rescue agency says divers recovered the data recorder around the flight's wreckage Sunday. Search teams also reportedly spotted the voice recorder in the debris, though officials say they haven't gotten their hands on it yet. (Video via BBC)

Searchers say signals sent from the plane's black boxes helped them discover the recorders amid the other wreckage. (Video via Euronews)

And officials say these two items are crucial findings in the search-and-recovery mission because the information in the recordings could be helpful in determining exactly what happened to the downed airliner.

As CNN points out, these devices could hold vital information from before and during the crash, such as altitude, flight speed, communication from the cockpit and more.

Sunday's key discovery comes a day after search teams pulled the plane's tail, among other debris, from the rough waters of the Java Sea. (Video via RT)

AirAsia Flight 8501 disappeared Dec. 28 while carrying 162 passengers from the Indonesian city of Surabaya to Singapore. So far, just 48 of the 162 bodies have been found.