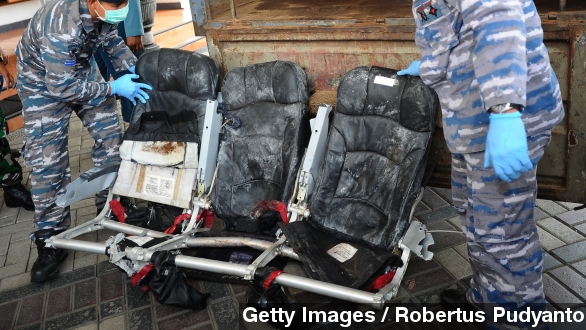 While there are still many questions as to why AirAsia Flight QZ8501 crashed into the Java Sea Dec. 28, we now know it was the co-pilot who was flying before the plane took a sharp descent.

"The plane ascended at the rate of 6,000 feet per minute, that's at fighter jet speeds, considered by experts to be impossible for a passenger jet," the NBC reporter said.

A report from the Indonesia National Transportation Safety Committee confirmed that while the co-pilot was flying the plane, the captain was monitoring him. It's believed the captain took over as the plane started to sharply descend.

Seventy bodies have been found in the Java Sea, but nearly 100 are still unaccounted for.

Weather is believed to have played a role in the plane's crash. A report released earlier this month from the Indonesian Agency for Meteorology, Climatology and Geophysics says icy conditions could have damaged the plane's engines. (Video via euronews)

Attempts have been halted to get the fuselage from the seabed — authorities are saying it's too fragile to move. Efforts to find more missing bodies could also end next week if nothing new is found.

The plane's black boxes were recovered earlier this month, but other than this new information about the co-pilot, there are still very very few public answers about what happened with the plane.