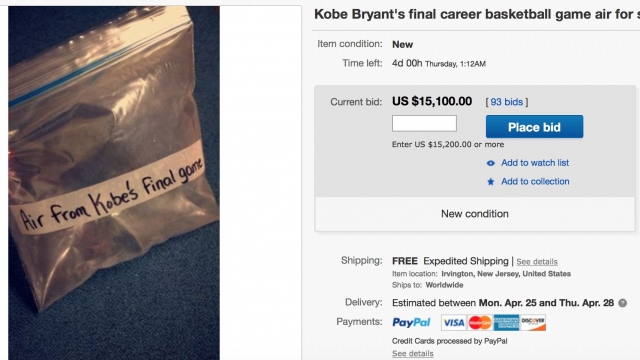 After 20 years, Kobe Bryant's days with the Los Angeles Lakers are over.

So why not relive the good times with a bag of air?

That's right, bags of air from Bryant's final game versus the Utah Jazz are hitting eBay.

This one in particular got the attention of several bidders, and the price skyrocketed to $15,000 at one point.

But it appears that bag of air has been removed from the site.

As of Sunday, more than 20 bags, purportedly from Bryant's final game, were listed on eBay.

Now, it's tough to confirm the authenticity of this air, but if it's real, you could inhale the same air that Bryant and celebrities, like Kanye West, Jack Nicholson, Jay Z and more breathed that fateful Wednesday night.

And if you're not an air person, you can still buy a streamer from the final game or even a reprintable ticket stub from the night. Happy bidding.

This video includes images from eBay and Getty Images.