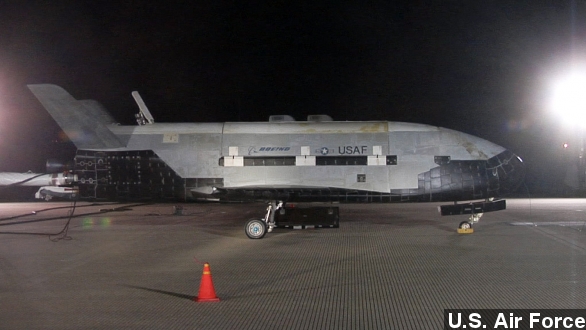 The Air Force's secret space plane is returning to Earth this week after spending close to two years in space doing something classified.

It's been a while since the X-37B made headlines, so we'll refresh your memory: it's a Boeing-built, unmanned, solar powered space plane, and the government has never said exactly what its mission is.

Last week, Vandenberg Air Force Base in California said it was preparing for the X-37B to land, capping off a 22-month mission that began in December, 2012.

This is the third flight for the program and the second for this particular spacecraft. The vehicle is meant to be reusable and to carry out long-range missions, so it looks like the mission has been a success.

Of course, it's hard to know for sure. In May, Air Force General William Shelton gave a statement to Space.com that kind of sums up the whole program: "X-37 is doing great. I can't tell you what it's doing, but it's doing great."

The spacecraft's classified mission has been fodder for conspiracy theorists saying it's testing space weapons or carrying out a spying mission or combating aliens.

Although you might actually be shocked at how much information about the secret mission isn't secret. We know, for instance, what the vehicle's heat shield is made of, how its powered, we know about its brakes, its wings, its propulsion system.

We know that it's based on the design of NASA's space shuttle but scaled down to around a quarter the size.

We also know it will soon be housed in the space shuttle's old storage facility and will operate out of Cape Canaveral.

We know it guides itself during takeoff, orbit, re-entry and landing. There are really just two main things we don't know: what was its payload, and what has it been doing up there all this time? (Video via Boeing)

Whatever it was, the Air Force says it will may need to send X-37B into orbit several more times before the mission objectives are complete, so there's plenty of time to work up your own theory.