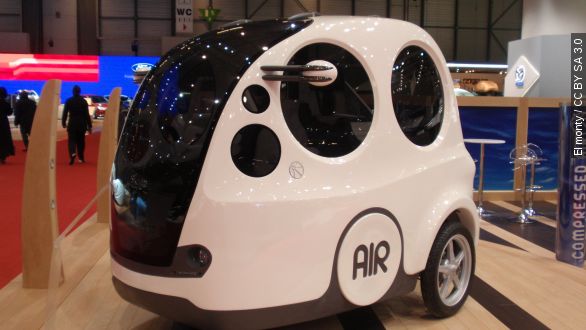 Electric cars might be a popular choice for environmentally conscious drivers who want to save fuel. But now there's a company trying to one-up that.

"The air car. The car that runs on air," Pat Boone said.

Zero Pollution Motors founder Ethan Tucker, alongside singer and political commentator Pat Boone, appeared on ABC's "Shark Tank" seeking a $5 million investment for a 50 percent stake in the company. Tucker says his company's cars, known as AIRPods, are much more convenient and environmentally friendly than even electric cars. (Video via CNN)

"If there's a compressor at a gas station, just like you fill up your tires, you can fill up your car," Tucker said.

Now, air-powered cars aren't a totally new idea, but they've been — for lack of a better term — picking up some steam the past few years.

Air-powered engines date back to the late 1800s, and the use of those engines in cars dates to about the early 1900s.

U.S. firm Zero Pollution Motors, Motor Development International in Europe and the India-based Tata Motors are basically all in the on the same project, with ZPM looking to launch the AIRPod in the U.S., most likely in Hawaii, by late 2015. (Video via Grand Lille TV)

ZPM is on a bit of a grassroots campaign to get things off the ground.

After receiving an investment from Canadian businessman Robert Herjavec on "Shark Tank," the company wrote on its Facebook page: "As Mark Cuban said, one of our biggest challenges will be to let people know that we exist. People need to know that there is a better, cleaner transportation alternative."

Couple that with an Indiegogo page, and you can see how these air-powered vehicles are mobilizing against the big car companies.

As for the price? Just $10,000. Yes, the AIRPod will likely air out your wallet, but not as much as a typical car.

This video includes an image from Getty Images, El monty / CC BY SA 3.0 and Rankin Kennedy C.E and music from Bensound / CC BY ND 3.0.