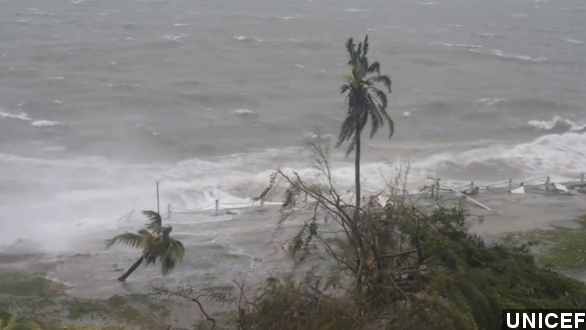 International aid is arriving in Vanuatu, one day after Tropical Cyclone Pam carved a direct path through the islands.

Planes carrying first responders from Australia and New Zealand landed Sunday, and the United Nations and the European Union have pledged assistance.

Pam literally blew entire communities away in what workers described as one of the worst weather disasters in Pacific history. But those on the ground say they won't know the extent of the damage until communications are reestablished. (Video voa UNICEF)

"The fear is really what it looks like when you’ve got the majority of the country who live in very rural situations," aid worker Tom Perry told CNN.

One aid organization official on the ground said, "at least 90% of housing here in Port Vila has been badly damaged," including Port Vila's hospital.

"We have been trying to repair the roof and clear out the water today, but it's a huge job. And it’s going to take weeks, if not months, to repair, and we're concerned about the burden of disease in the meantime," doctor Carina Smith told the BBC.

Aid officials have confirmed eight deaths from the storm, but that count is expected to rise as reports come in from outlying communities.