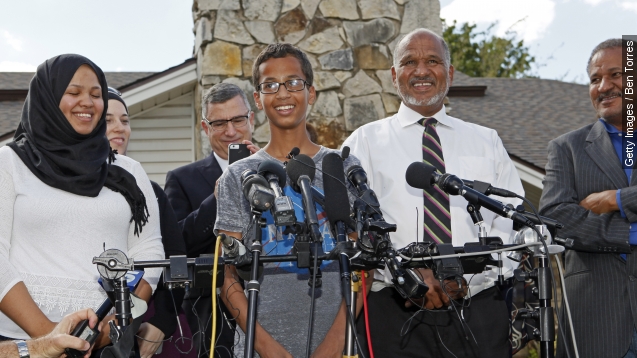 Ahmed Mohamed, who moved to Qatar with his family after his homemade clock was mistaken for a bomb by school officials back in September, isn’t quite done with the ordeal. His family is now reportedly seeking $15 million in damages.

In a notice from his attorneys obtained by the Fort Worth Star-Telegram, the 14-year-old claims he suffered physical and mental anguish because his civil rights were violated during what they called “unlawful detention, interrogation, arrest, and public mistreatment.”

In the notice, his attorneys cited the U.S. Code and Title VI of the Civil Rights Act of 1964, and it looks like he has a strong case.

The code states any person who “subjects, or causes to be subjected, any citizen of the United States ... to the deprivation of any rights, privileges, or immunities secured by the Constitution and laws, shall be liable to the party injured.”

Ahmed is a citizen and, according to his letter to the Irving PD, he was illegally detained and questioned without access to a lawyer or his parents. If that’s true, this could be a fairly cut-and-dried case.

The arrest launched Ahmed into the national spotlight, drawing support from President Obama and Mark Zuckerberg. He even landed an invitation to the White House.

But for all the support, there were plenty of conspiracy theories claiming Ahmed had ulterior motives for his clock, pointing to his family’s involvement with the Council on American-Islamic Relations, or CAIR.

“They’re tied, as you mentioned, with CAIR, and CAIR is Muslim Brotherhood and Hamas tied. They’re basically involved in civilization Jihad.” (Video via TheBlaze)

Ahmed accepted a scholarship to join the Qatar Foundation’s Young Innovators Program in October. His attorneys' notice gave the city of Irving 60 days to respond to the demands, noting they will otherwise file a civil lawsuit. (Video via PBS)