After Recent Shootings, Police And Protesters Are Coming Together 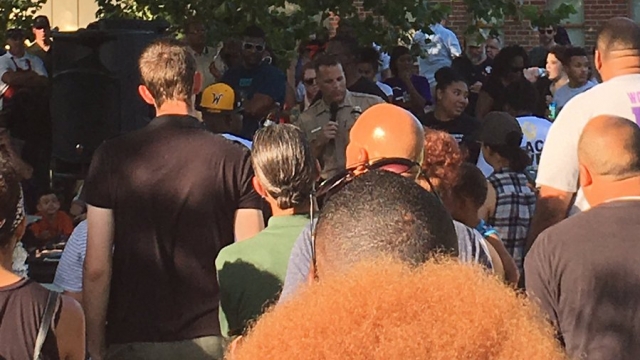 Protesters and law enforcement appear to be uniting in some communities after a tense few weeks following the deaths of Alton Sterling, Philando Castile and eight police officers in Dallas and Baton Rouge, Louisiana.

The Wichita, Kansas, community came together for a barbecue Sunday night.

Hundreds of people packed a park in Wichita for the First Steps Community Cookout with a goal of building a stronger relationship among law enforcement, activists and the community. And they're not alone.

That same day, a WGN-TV reporter captured this video in Ohio shortly after three Baton Rouge officers were killed. A group of activists holding a sign that said "Love your neighbor" held hands and prayed for peace with a Cleveland police officer.

And earlier this month, Black Lives Matter and All Lives Matter protesters united in Dallas, hugging each other and praying together.

"Today we're going to show the country how we came together," an All Lives Matter demonstrator said with his arm around a Black Lives Matter activist.