After Orlando Attack, Clinton And Trump Actually Agree On Something 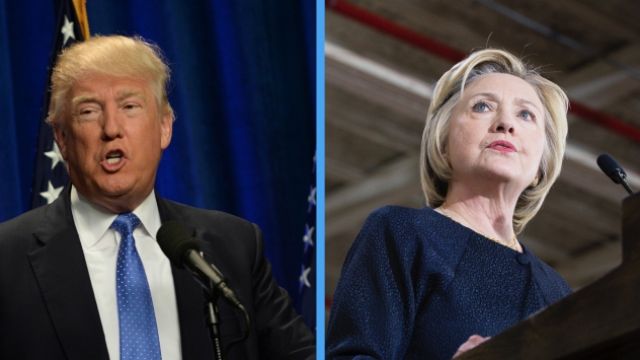 In the wake of the deadliest mass shooting in U.S. history, both presumptive presidential nominees addressed the nation about what should change.

When it comes to immigration, Donald Trump and Hillary Clinton have different views.

"When I'm elected, I will suspend immigration from areas of the world where there's a proven history of terrorism against the States, Europe or our allies, until we fully understand how to end these threats," Trump said.

"Inflammatory, anti-Muslim rhetoric and threatening to ban the families and friends of Muslim Americans as well as millions of Muslim businesspeople and tourists from entering our country hurts the vast majority of Muslims who love freedom and hate terror," Clinton said.

The two also have very different opinions on gun access.

"She wants to take away Americans' guns and then admit the very people who want to slaughter us. I will be meeting with the NRA, which has given me the earliest endorsement in a presidential race, to discuss how to ensure Americans have the means to protect themself in this age of terror," Trump said.

"I believe weapons of war have no place on our streets, and we may have our disagreements about gun safety regulations, but we should all be able to agree on a few essential things. If the FBI is watching you for suspected terrorist links, you shouldn't be able to go buy a gun with no questions asked," Clinton said.

The presumptive nominees' responses are a bit more aligned when it comes to fighting terrorism.

"Efforts to defeat ISIS on the battlefield must succeed. But it will take more than that. As president, I will make identifying and stopping lone wolves a top priority," Clinton said.

And working with Muslim communities.

"Since 9/11, law enforcement agencies have worked hard to build relationships with Muslim American communities. Millions of peace-loving Muslims live, work and raise their families across America. We should be intensifying contacts in those communities, not scapegoating or isolating them," Clinton said.