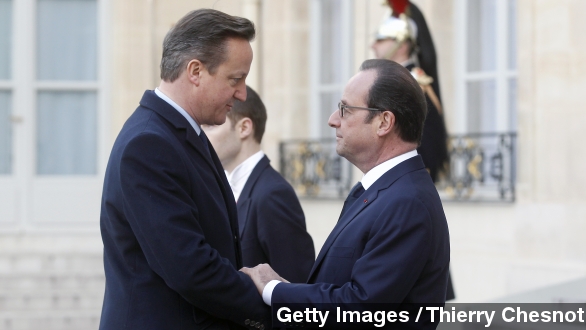 In the wake of the terrorist attacks in France over the past week, British Prime Minister David Cameron is pushing for more surveillance laws.

On Sunday, the prime minister was in Paris, linking arms with fellow world leaders as part of a unity march that drew more than 1 million people out onto the streets of Paris to commemorate the victims of the attacks. (Video via France 24)

Then on Monday, Cameron was quick to argue being able to monitor communication was key to preventing similar attacks. (Video via BBC)

"But the question remains are we going to allow a means of communication where it simply isn't possible to do that, and my answer is no we must not," Cameron said on the BBC.

Cameron argued that current safeguards against surveillance have created a secure space for extremists, and to ensure the country's safety, those secure channels of communication have to be eliminated.

But Cameron's comments drew criticism from a number of people, including Deputy Prime Minister Nick Clegg, who had attended a rally for France in Trafalgar Square on Sunday night. (Video via Sky News)

The Guardian quoted Clegg in a speech to journalists Monday night, "The irony appears to be lost on some politicians who say in one breath that they will defend freedom of expression and then, in the next, advocate a huge encroachment on the freedom of all British citizens."

And an editor for tech blog BoingBoing argued that, to truly achieve Cameron's surveillance goals, the prime minister would have to implement a China-like censorship scheme, and even confiscate foreign visitors' smartphones.

But Cameron's surveillance efforts are far from new. It's a platform Cameron has long pursued, alongside British intelligence agency MI5.

Back in July, Cameron pledged hundreds of millions of pounds for a surveillance and intelligence package as part of a 1.1 billion pound investment in cyber security. (Video via ITN)

The European Union is also looking at increased collaboration between governments when it comes to intelligence and monitoring possible threats.

This video includes an images from Getty Images and music from Chris Zabriskie / CC BY 4.0.