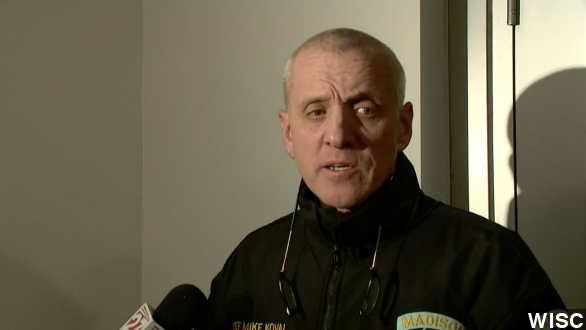 Echoing similar protests across the country, demonstrators in Madison, Wisconsin marched in solidarity against police violence this weekend after the shooting death of an unarmed mixed-race teenager.

19-year-old Anthony Robinson was shot and killed after a scuffle with a police officer Friday night; authorities say Robinson was unarmed at the time. Almost immediately after the incident, protesters began demonstrating against police violence.

And Madison police chief Mike Koval is showing sympathy for the protesters. "Reaction at the scene of some of our citizens is extremely volatile, emotional, and upsetting. We understand that, that's absolutely appropriate under the circumstances."

Protesters have been quick to link Robinson's death with those of Michael Brown in Missouri and Eric Garner in New York. Those incidents sparked tense standoffs between police and protesters, occasionally escalating to violence.

Koval seems determined to head off similar confrontations in Madison. In the wake of the shooting, he's met with members of Robinson's family and expressed sorrow at the loss of Robinson's life.

The Madison Police Department has also been transparent about the shooting, releasing the name of the officer involved and promising a full, independent investigation by the state's Department of Justice. (Video via WMTV)

In September, Koval told The Wisconsin State Journal his personal lessons from how Ferguson's police department responded to the Michael Brown shooting.

"I see in Ferguson a series of missteps and miscues. ... We will be so much different from them just from the initial offering."

The officer involved in the shooting, 45-year-old Matt Kenny, was treated for a head wound sustained during the incident, and is currently on paid administrative leave.