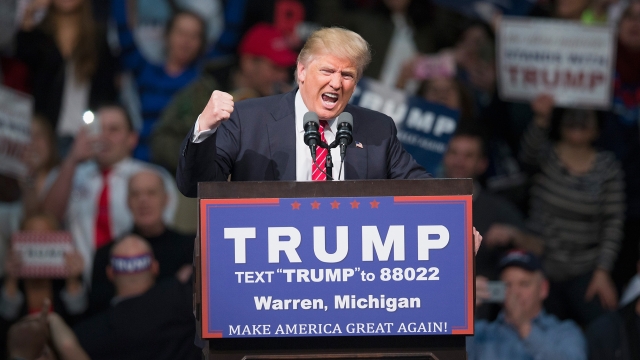 SMS
After Condoning Violence, Trump Says He Doesn't Condone Violence
By Grant Suneson
By Grant Suneson
March 13, 2016
Donald Trump went on "Meet the Press" to say he doesn't condone the violence at his rallies, but his past words and actions seem to imply otherwise.
SHOW TRANSCRIPT

Donald Trump is on the defensive after several rallies in Midwest cities turned violent as protesters clashed with Trump supporters.

Both GOP and Democratic opponents have said Trump is responsible for the incidents because of the violent and divisive rhetoric he uses at rallies. Trump tried to clear the air Sunday morning in an interview with "Meet the Press."

"I don't accept responsibility. I do not condone violence in any shape," Trump said on "Meet the Press."

But we've seen Trump call for his supporters to beat up protesters before.

"You know what they used to do to guys like that in a place like this? They'd be carried out on a stretcher, folks," Trump said in Las Vegas.

"Maybe he should have been roughed up because it was absolutely disgusting what he was doing," Trump said in Alabama.

"So if you see somebody getting ready to throw a tomato, knock the crap out of 'em, would you? Seriously. ... I promise you, I will pay for the legal fees. I promise," he said in Iowa.

One of Trump's supporters may take him up on that offer. John McGraw allegedly sucker-punched a man being escorted out by police at a North Carolina rally.

McGraw was charged with assault and battery and disorderly conduct. Trump said he instructed his people to look into paying his legal fees.

Trump's attempt to distance himself from the violence seems to be at odds with his aggressive stance toward protesters and his support for those who attack them, but he has continued to deflect blame.

Trump said Democratic candidate Bernie Sanders sent people to disrupt his rallies, and he threatened to send some of his own supporters to Sanders events in the future.

This video includes clips from CNN and Donald J. Trump for President Inc. and images from Getty Images.