After Charleston, The Confederate Flag Is Still Flying High 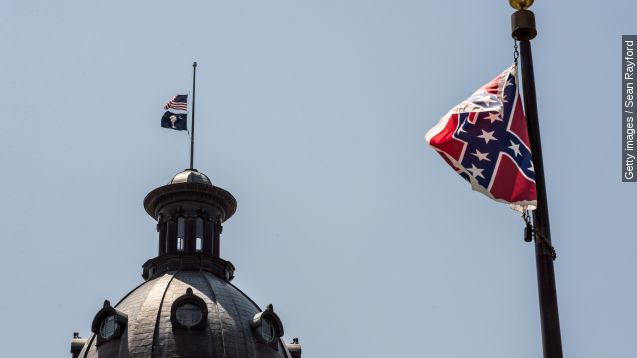 SMS
After Charleston, The Confederate Flag Is Still Flying High
By Ben Levin
By Ben Levin
June 20, 2015
In the wake of a mass murder at a black Charleston church, many are questioning whether the South Carolina Capitol should fly a Confederate flag.
SHOW TRANSCRIPT

The Confederate flag that still waves from the grounds of South Carolina's statehouse in Columbia has come under attack in the wake of the murder of nine black churchgoers in Charleston.

The murders have ripped open racial scars in a state that generally chooses to celebrate its role as the first state to secede from the union after the election of Abraham Lincoln. (Video via The National)

But in the wake of the Charleston attack, many are saying anew that the flag celebrates the centuries of violence experienced by blacks under slavery and segregation. (Video via WCIV)

That's because police say these murders were racially motivated, carried out by a shooter who in a website it appears he built openly displayed the Confederate flag in pictures and on his car's license plate.

"Like, how you can you make sense of your state actually fully embracing you and seeing you in a moment of grief when that thing is flying on this ground?" asked Chris Hayes.

"What I’d say is, as with any other political compromise, it will be imperfect." said U.S. representative and former governor Mark Sanford. (Video via MSNBC)

The flag's current status is a product of politics — it was originally placed on the state capitol's dome in 1962 at the height of the civil rights movement by South Carolina's all-white legislature.

“And it was done so across the South and the implication was clear.” said Rev. Joseph Darby.

“What do you see  when you see the Confederate flag flying?” asked Elaine Quijano.

In 2000, a political compromise moved it from the dome to a nearby memorial to Confederate soldiers, where it still flies today. (Video via WHNS)

"Meaning the compromise of being able to still fly the Confederate flag because it’s part of the proud traditions for some Carolinians…” said Aliysn Camerota.

“And that works for you?"

And, per state law, the flag "must be flown," which is interpreted as meaning it can only be lowered by order of the legislature. So while every other flag is at half-staff in the wake of the shooting, the ol' stars and bars stands tall.

A political reporter based in Columbia pointed out the flag isn't currently on a pulley system, so half-staff isn't even an option.

In South Carolina, opinions on the flag are divided along racial and political lines. Most Democrats and black people want the flag off of government property, whereas most white people and Republicans support the status quo. What that means is that for now the flag is probably staying put.

This video includes images from Getty Images and Jason Lander / CC BY 2.0.