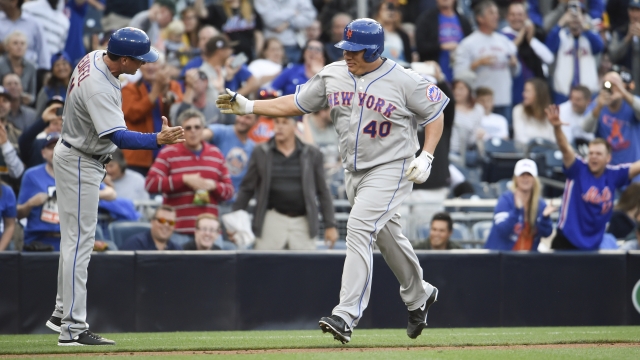 SMS
After 19 Years, This Baseball Player Finally Hit His First Home Run
By Carter Woodiel
By Carter Woodiel
May 8, 2016
Mets starter Bartolo Colon was already a fan favorite for his solid pitching and significant heft, and then he launched his first career home run.
SHOW TRANSCRIPT

They say every time you go out to the ballpark you have a chance at witnessing history, and on Saturday, fans in San Diego witnessed the best kind of history — a home run by Bartolo Colon.

The 285-pound Mets starter lifted a James Shields pitch over the left field wall at Petco Park for his first career homer. The blast sent Mets fans in the stands — and the players in the New York dugout — into a frenzy.

Before this, when fans thought of Colon hitting, they'd probably think of his helmet falling off while he struck out or maybe the time he hit an RBI double last year. Either way, this is a really big deal.

"Once I hit it, I knew it was gone," Colon said after the game, adding, "I think right now, this is the biggest moment of my career."

Colon's dinger came in his 226th career at-bat. At 42 years old, the former Cy Young Award winner is the oldest big leaguer ever to hit his first career home run.

Keep in mind, Colon's blast wasn't just any old wall-scraper. The ball had an arc to it, staying in the air for almost six seconds and traveling 365 feet, according to MLB's Statcast.

His home run trot didn't disappoint either. Colon took over 30 seconds to round the bases.

"I've seen him hit it plenty of times in batting practice and stuff," Mets catcher Kevin Plawecki said. "And I, we all had a hunch that [if] he runs into one, it's gonna go."

Of course, Colon isn't just there to hit home runs. He's having a solid season for the Mets on the mound this year with a 3-1 record and a 2.82 ERA.

And even after the homer, Colon's career stat line isn't quite complete. In almost 250 plate appearances, he's still never drawn a walk. Who knew a longball would come first?

This video includes clips from La Semana Deportiva and SNY and images from Getty Images.