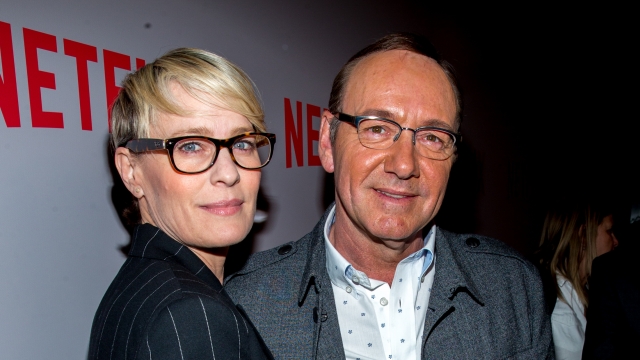 SMS
Actress Robin Wright Pulled A Claire Underwood To Get Equal Pay
By Calvin Stovall
By Calvin Stovall
May 18, 2016
The veteran actress leveraged her character's growing popularity for a big payday.
SHOW TRANSCRIPT

Fans of Netflix's "House of Cards" know Claire and Frank Underwood are equal partners in their relationship.

According to the Huffington Post, Wright told a crowd at a Rockefeller Foundation event in New York she demanded to be "paid the same as Kevin" for her role on "House of Cards."

Wright's co-star Kevin Spacey was reportedly making $500,000 per episode in 2014, and insiders said the number could go up to $1 million.

"There are very few films or TV shows where the male — the patriarch — and the matriarch are equal. And they are in 'House of Cards,'" Wright said.

Wright told the Rockefeller Foundation crowd: "I was looking at the statistics, and Claire Underwood's character was more popular than [Frank's] for a period of time. So I capitalized on it. I was like, 'You better pay me, or I'm going to go public. And they did."

The fourth season of the series debuted in March and delved even deeper into Claire's character. The fictional first lady would likely be proud of Wright's power move — if she were available for comment.

This video contains clips from Netflix / 'House of Cards' and images from Getty Images.