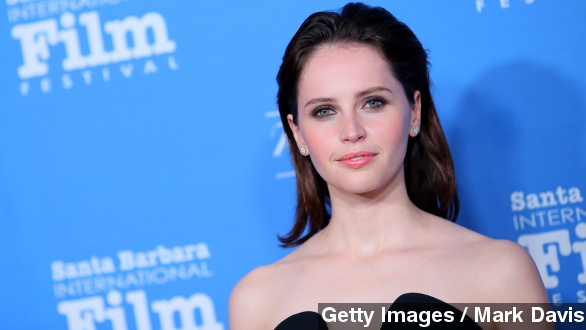 Oscar-nominated actress Felicity Jones may have been asked to become one with the Force. (Video via Twentieth Century Fox Film Corporation / "Star Wars: Episode III - Revenge of the Sith")

The actress, best known for her role in "The Theory of Everything," is reportedly being cast for a standalone "Star Wars" movie, which so far has been flashily titled "Untitled Star Wars Project." Catchy, right?

We do know the man who created the Jedi mind trick, George Lucas, will be a writer and Gareth Edwards will be directing. He's known as the director for the latest "Godzilla" reboot.

We don't know what Jones' role will be in the movie, but so far, IMDb lists her as the only cast member.

The Hollywood Reporter punnily compared the secrecy about the flick as "thicker than the mists of Dagobah."

We literally don't even know what the plot will be.

But other outlets are citing "sources" that Aaron Paul is being eyed as a male lead.

And Variety says Disney is "banking heavily" on the "Star Wars" franchise, especially since it shelled out so much money to obtain it — $4 billion.

The film is slated for release in December 2016. And if you can't wait that long to get your "Star Wars" on, "Star Wars: Episode VII" will be out at the end of this year.