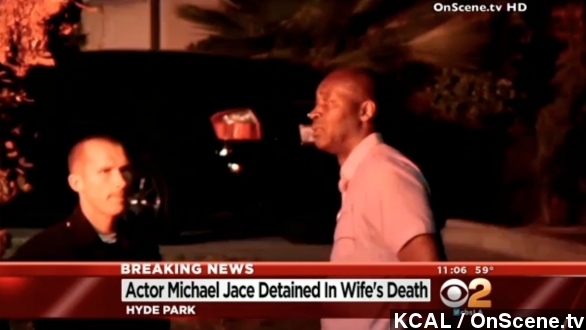 By Christine Slusser
May 20, 2014
Michael Jace was detained by Los Angeles Police Monday night for questioning on the shooting of his wife, April Jace.
SHOW TRANSCRIPT

Actor Michael Jace is in police custody after being detained Monday night for the fatal shooting of his wife.

"Police say he has not been arrested, he is merely being questioned and detained after neighbors heard shots being fired here ... When police got here, they say they found April Jace inside dead."

TMZ cited unnamed "law enforcement sources" and reports when the the actor called 911, he said he was the one who shot his wife.

While some reports indicated Michael Jace had not been placed under arrest, by Tuesday morning, ABC's headline read Jace had been "booked for murder."

"Moments ago, Los Angeles Police telling ABC news, 50-year-old 'Shield' actor Michael Jace has been arrested and charged with murder in the death of his wife, April Jace."

TMZ also reports children were in the home at the time of the shooting. April Jace does have three children, but it has not been confirmed whether all the children inside the home were hers.

Michael Jace is known for his roles in Southland as well as "The Shield" where he played Detective Julien Lowe. (Via fX Network / "The Shield")

According to April Jace's Facebook page, she and Michael celebrated their 10 year anniversary last June.

Police confirmed Michael Jace was the only person detained in connection with the shooting.