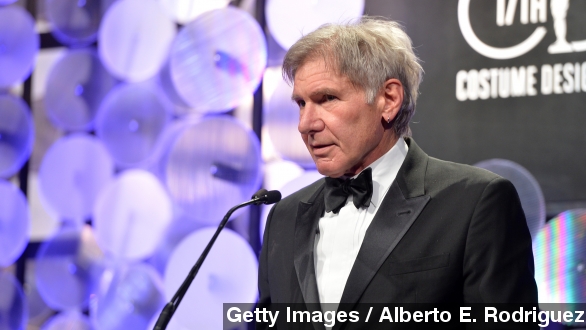 SMS
Actor Harrison Ford Injured In Small Plane Crash
By Steven Sparkman
By Steven Sparkman
March 5, 2015
The 72-year-old actor was reportedly on board a plane that went down Thursday, crash landing on a California golf course.
SHOW TRANSCRIPT

Actor Harrison Ford was reportedly seriously injured when a plane he was riding in crash-landed on a California golf course Thursday.

Local outlets reported the 72-year-old suffered multiple injuries and was taken to a local hospital, where he was described as being in critical but stable condition.

"These generally turn out quite traumatic, but I can report that the patient left the scene conscious and breathing."

Early speculation is that Ford's plane suffered some sort of mechanical problem, judging by eyewitness accounts.

Ford is a longtime pilot who has spoken out repeatedly about the benefits of general aviation. He's also survived crash landings before in both planes and helicopters.

This video includes images from Getty Images and Twitter / @AndrewSiciliano.