Activists Are Livid After Developer Bulldozes Over Prairie Dogs 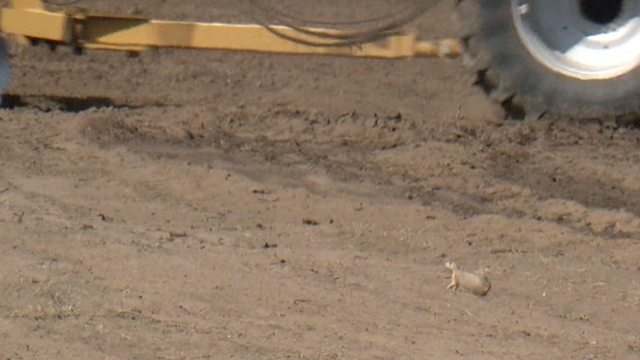 SMS
Activists Are Livid After Developer Bulldozes Over Prairie Dogs
By Briana Koeneman
By Briana Koeneman
September 7, 2016
Protesters say prairie dogs at the site have been killed and that they're trying to save the remaining animals from the same fate.
SHOW TRANSCRIPT

"Look at you. How does it feel to just drive over live animals? What does that feel like?" a prairie dog advocate asked several construction workers.

Animal advocates in Colorado are livid after a local developer bulldozed through a prairie dog colony without doing anything to save the critters.

Newsy's partners at KMGH spoke with several people who protested the excavation in Parker, Colorado, on Tuesday. Deanna Meyer with Prairie Protection Colorado was one of them.

"Most developers would at least try to remove the prairie dogs from the land prior to commencing with development. That's what I see most of the time. This is a rare thing," Meyer told the outlet.

SEE MORE: Montana Prairie Dogs Are About To Be Vaccinated In Bulk By Drones

Protesters say some prairie dogs at the site have already been killed and that they're trying to save the remaining animals from the same fate.

KMGH tried to speak to someone involved with the excavation, but the outlet didn't get a response.

The city of Parker says there are no regulations or rules on how developers should handle prairie dogs.

Protecting the animals from construction projects in Colorado is a constant struggle for advocates like Meyer. But sometimes, there's a happy ending.

Just last month, she convinced the city of Boulder to pay to have a colony removed from a site before construction started.

Meyer told KMGH the colony in Parker was one of the last ones in the area.