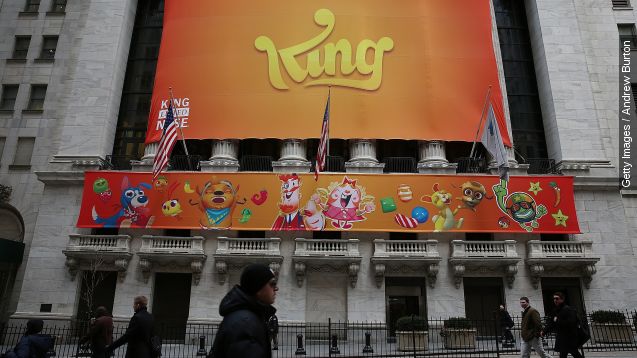 The acquisition is part of the company's plan to expand into mobile gaming, the fastest-growing market in video games.

"Candy Crush" is played in 196 countries and has almost half a billion monthly active users. (Video via King Digital / "Candy Crush Saga")

Women make up 60 percent of King Digital's audience. CEO Robert Kotick said Activision Blizzard is mostly tailored to the male audience and said he was excited "to address hundreds of millions of female customers." (Video via King / "Candy Crush Saga.")

There are some skeptics, though. The New Yorker says "Candy Crush" may be a "one-hit wonder" in the industry.

The popular mobile game accounts for one-third of King Digital's profits, although the gains have been slipping in the past few years. (Video via King / "Candy Crush Saga.")

Consumer spending on "Candy Crush" has gone down about 13 percent since last year. (Video via King / "Candy Crush Saga.")

I mean, remember "Angry Birds"? It was a great hit at first, but profits dropped 73 percent in 2014 alone. (Video via Rovio Entertainment / "Angry Birds.")

Both companies unanimously approved the deal, which is expected to be finalized by spring 2016.