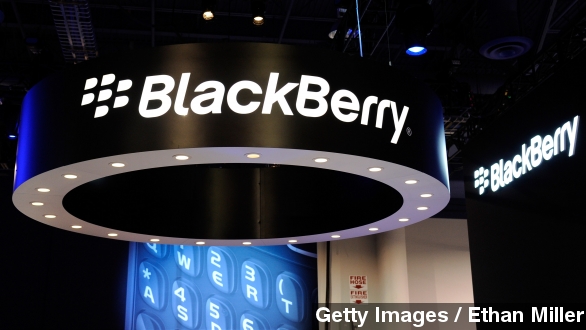 Remember BlackBerry? Wall Street does, at least when there are reports that someone’s looking to buy the company.

BlackBerry’s shares spiked after a report surfaced that Samsung was considering a $7.5 billion acquisition: they jumped 30 percent on the news, then abruptly cut half that new value when BlackBerry issued a public denial.

“BlackBerry has not engaged in discussions with Samsung with respect to any possible offer to purchase BlackBerry.”

And in an email to Bloomberg, Samsung called the report “groundless.”

Despite both companies’ quick action to get the record straight, the news launched a flurry of stock activity and discussion across the industry.

At the end of the day — and into after-hours trading — the rumor had done nice things for BlackBerry’s market cap.

But even with a stock boost like that, the Canadian phone maker is not what it once was. It lost its third place share of the smartphone OS market to Microsoft in 2013 and has never recovered.

So maybe it’s no surprise the industry wants to believe the rumors. CNBC’s Jim Kramer suggests a buyout is better than the languishing BlackBerry is currently doing.

“If I’m a BlackBerry shareholder, do I want Samsung to buy me?” asked Kelly Evans.

“Yeah, you want anything,” Kramer said.

And from some perspectives a deal makes sense. Outlets note Samsung could have eyes on boosting its security abilities. It’s been pushing its own KNOX security software, but getting BlackBerry’s pedigree would do wonders.

“If there is one area where the BlackBerry has been relatively unassailable, it is the security of its devices. Hey, even Obama uses a BlackBerry.”

Of course, acquisition wouldn’t be strictly necessary for Samsung to get some of BlackBerry’s know-how. The two companies cut a deal that combines their security services back in 2014.