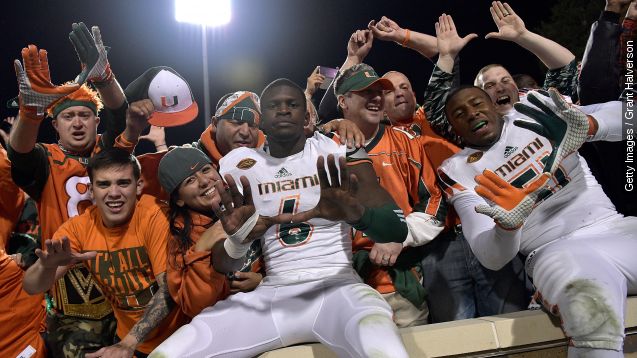 SMS
ACC Suspends Referees After Wild Finish To Miami-Duke Game
By Matt Moreno
By Matt Moreno
November 1, 2015
Miami beat Duke 30-27 Saturday night after a kickoff return led to a touchdown as time expired. The ACC says officials made a few errors on the play.
SHOW TRANSCRIPT

Saturday night's Miami versus Duke game featured one of the most exciting finishes of the college football season ... and it never should have happened.

Miami beat Duke 30-27 Saturday night thanks to an eight-lateral kickoff return that ended in a touchdown. The officials threw a flag for a block in the back on the play but picked it up after a replay review.

The ACC says that was one of "a series of errors" on the play that led to the two-game suspensions for each official.

The ACC lists four errors on the final play: A blown call on a downed player, a missed block in the back call on the 16-yard line, improper communication on the picked up flag and a missed call for a player leaving the bench during the play.

As for what this means for Duke's loss? Likely nothing.

The ACC statement doesn't mention any changes to the final score, and any such move would be unprecedented.

The suspension of an entire referee crew is rare. The last time the ACC publicly suspended multiple college football refs was in 2012.

During the Florida State and Miami game, the officiating crew improperly applied a 10-second runoff penalty to a Seminoles false start.

All of the officials for that game received disciplinary letters, but only the crew chief received a suspension.

The same day, the ACC suspended two officials for missing a call at a Duke and North Carolina game.