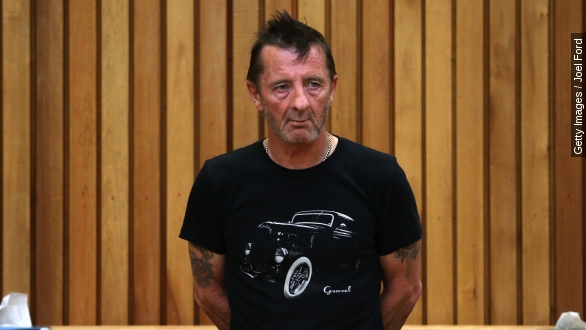 Phil Rudd, drummer of the iconic rock band AC/DC, pleaded guilty in a New Zealand court Tuesday to charges of threatening to kill and drug possession.

Rudd was scheduled to stand trial but reportedly changed his plea to guilty before the trial got underway. He could face more than seven years behind bars. (Video stuff.co.nz)

In December, the 60-year-old drummer pleaded not guilty to threatening to kill, possession of methamphetamine and possession of cannabis. It's unclear why he changed his mind. (Video via Euronews)

During proceedings, the court reportedly heard that Rudd asked an associate to "take out" a former security guard "after becoming angry when his solo album flopped."

Rudd was originally accused of attempting to orchestrate the murder of two people, but police dropped those charges after prosecutors reportedly said there wasn't enough evidence to move forward.

AC/DC was formed in the mid-'70s with Rudd serving as drummer the vast majority of that time. The legendary rock band was inducted into the Rock and Roll Hall of Fame in 2003. (Video via Atlantic Records / AC/DC)

Drummer Chris Slade has been filling in for Rudd, and the band says he will continue as Rudd's replacement when AC/DC goes back on tour in May.

Rudd is due back in court June 26 for sentencing.