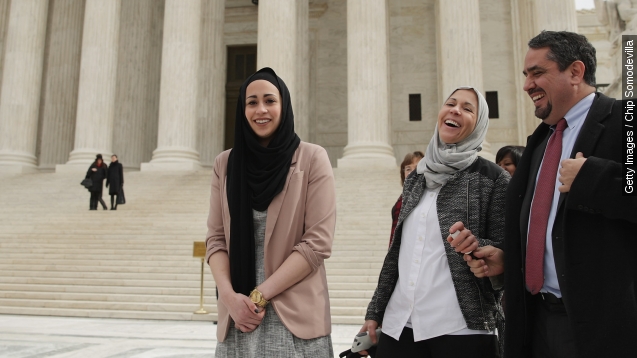 The Supreme Court has ruled Abercrombie and Fitch discriminated against a woman when the company chose not to hire her because of something she wore.

Samantha Elauf applied to work at a Tulsa, Oklahoma, Abercrombie store in 2008 as a sales associate but wasn't hired because her hijab, a headscarf traditionally worn by Muslim women, violated the company's "look" policy.

The company's policy has come under fire before. The clothing retailer said in court filings those rules are in place to "ensure [Abercrombie's] consistent brand message."

But others have called it "discriminatory." The company settled two 2013 lawsuits: one that accused it of firing a Muslim teenager for not removing her hijab and another job applicant said she wasn't hired after an interviewer asked her about her garment. (Video via Abercrombie & Fitch)

The retailer has also faced lawsuits over accusations of a lack of diversity. In 2005, Abercrombie settled three lawsuits filed by former employers over gender and racial discrimination. The company paid out nearly $50 million to thousands of former employees.

Since these lawsuits, Abercrombie has had to strike its policy banning employees from wearing headscarfs for religious reasons, and according to The Huffington Post, more than half of its sales associates are now minorities.

The issue in the Elauf case comes down to whether an employer must accommodate for religious practices when an employee doesn't make a specific request.

The court filings said Elauf's religion never came up in her interview, so Abercrombie argued it did not know for certain her headscarf was worn for religious reasons.

But the court disagreed. Justice Antonin Scalia wrote in the court opinion, "An employer may not make an applicant's religious practice, confirmed or otherwise, a factor in employment decisions."

Abercrombie and Fitch will pay out $20,000 to Elauf. In a statement, the company reiterated it had abandoned the "look" policy and is committed to "diversity and inclusion."