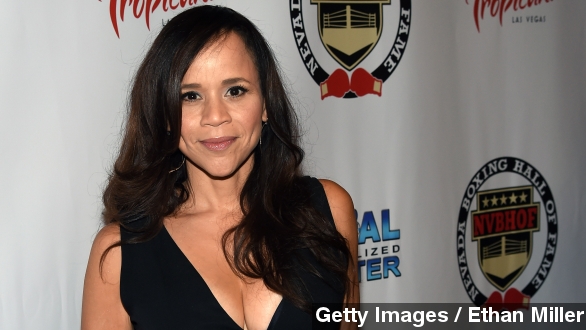 By Cliff Judy
January 15, 2015
Variety reports Rosie Perez won't come back to ABC's talk show after a stint with a Broadway play. Perez started on "The View" only four months ago.
SHOW TRANSCRIPT

One of "The View's" Rosies is leaving the ABC daytime talk show after only four months on the job, if a report the network has already denied is to be believed.

Variety reported late Wednesday Rosie Perez is on her way out.

"Perez had taken off the month of January to appear in the Broadway play “Fish in the Dark,” but it’s understood that she won’t be coming back to the Hot Topics table once she’s done."

"Fish in the Dark" is the Broadway show written by and starring "Seinfeld" co-creator Larry David.

After previously guest hosting for "The View," a revamped management team announced Perez as a new permanent host in early September. The move was part of a larger shakeup with Jenny McCarthy and Sherri Shepherd leaving, the show getting a new producer, a new logo and moving to a new studio with a new set. (Video via ABC / "The View")

So leaving this quickly would certainly be a surprise. But ABC did its best to shoot the rumor down.

In a statement several media outlets now say they received from ABC, the network wrote, "Rosie Perez is currently in rehearsal for her Broadway play for the month of January. Her status with the show has not changed."

Granted, that didn't address Perez's longterm status with the daytime talk show. Perez herself responded to a fan Tuesday asking when she'd be back by tweeting, "Soon."

Late morning and daytime television seem to be the puzzle few, if any, talk shows can solve right now. And ABC is no exception.

The same day as the Rosie Perez rumors, Radar Online published a story citing its sources saying the network is ready to pull the plug on "The View" entirely and replace it by simply extending the much higher-rated "Good Morning America" by an hour.